Home > Blog > Where the Surf Meets the Turf: Horseracing is Back in Del Mar!

We’re excited to announce that the track is back at the Del Mar Thoroughbred Club!

In case you were looking for one, this is your excuse to dress up again then head out to the race track to place your bets and hope for the best.

Check out the full calendar of events this summer along with the upcoming Bing Crosby Season in November, then read on to see how this famed racetrack achieved the status it enjoys today.

A Look Back in Time The date was July 3, 1937, and famous crooner Bing Crosby was personally greeting fans at the Grand Opening of the Del Mar Thoroughbred Club Racetrack. He had been convinced by William A. Quigley, a former football player and stockbroker, to invest in the racetrack, which was not far from Crosby’s home and stable in Rancho Santa Fe. Crosby agreed to commit his time, money and energy to the project, and sure enough, his undeniable charm and A-List friends helped elevate the Del Mar racetrack into the must-see event of Southern California.

From 1942 through 1944, Del Mar experienced its “dark” period as the U.S. entered into World War II. During this time, the races stopped, and the grounds were used for military training then as a manufacturing site for B-17 bombers.

Playground Of The Stars After World War II, a new crop of Hollywood arrived, turning Del Mar into a “playground of the stars”. With its proximity to Los Angeles, traveling to Del Mar was an easy trip and became a summer tradition for many who were drawn to the beautiful seaside town.

With its vintage coastal charm, natural elegance, and deep connection to the history of San Diego, Del Mar remains home to many professional athletes and celebrities, including skateboarder Tony Hawk, NFL quarterbacks Aaron Rogers and Drew Brees, and Steve Perry, original lead singer of the band Journey, to name a few!

After a fun day at the races, head back to Villa L’Auberge to unwind in your private suite as you watch the sunset over the Pacific while listening to the sounds of the waves. No matter how your luck turns out at the track, San Diego is always a sure bet. 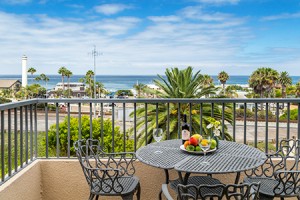