Home > Blog > Step Back in Time Where the ‘Turf Meets the Surf’ in Del Mar, CA

Del Mar is rich with beauty and history. Since the legendary day of Hollywood’s golden years, Del Mar has been a top destination for movie stars as well as those who have a love of the luxurious resort life and stunning seaside bluffs. With pristine beaches, award-winning cuisine, and English Tudor architecture, Del Mar could easily fit right into a quaint European hillside nestled on the coast.

Convinced that the area, soon to become Del Mar, was “the most attractive place on the entire coast,” Theodore Loop, a railroad engineer from New York, traveled to Southern California to build a railroad connecting Los Angeles and San Diego. The original train tracks were laid in the middle of Del Mar in 1882. In the same year, Loop met a successful rancher, Jacob Shell Taylor. Taylor and Loop were both captivated by the stunning seaside area and recognized the perfect development opportunity.

Loop was a visionary and had high hopes for the area, wanting to draw visitors far and wide. He built forty small houses, two school houses, observation tower, a train depot and a water system.

Ready to elevate Del Mar into a vacation destination he soon founded the village of Del Mar in 1886 and developed the area’s first seaside resort, “Casa Del Mar,” establishing Del Mar as an idyllic getaway on the Southern California Coast.

After five years of bustling success and development, Jacob Taylor woke to the smell of smoke in 1889 in his hotel room. After evacuating guest to their safety the hotel burned down two hours later. Taylor said he’d return to rebuild the hotel but unfortunately he moved to Texas, leaving behind the town he helped found.

But hope was on the horizon for Del Mar …

In the early 1900’s the South Coast Land Company purchased a majority of the land in Del Mar and had big plans for redevelopment. The first project for the developer was the hotel called the “Stratford Inn”.  They hired prominent Los Angeles architect John C. Austin to build the new hotel on the hill overlooking the beach. Today, L’Auberge Del Mar, a luxury hotel sits on this land.

On March 9, 1909 the Stratford Inn opened for business with glamorous fan-fare. By 1910, Del Mar began drawing the attention of Hollywood stars of the silent film days that were attracted to Del Mar’s elegant appeal and its beautiful bluffs along the ocean.

During the 20’s and 30’s Del Mar continued to experience tremendous growth and development. It was during this time that buildings were starting to be designed to match the English Tudor architecture that the area is known for today.

Picture it, July 3, 1937 and famous crooner, Bing Crosby, is there to greet fans at the grand opening of the Del Mar Thoroughbred Club racetrack! Crosby was convinced by William A. Quigley, a former football player and successful stockbroker, to invest in the racetrack which was not far from Crosby’s home and stable in Rancho Santa Fe. Crosby agreed to commit his time, money and energy to the project, and sure enough his undeniable charm and A-List friends helped turn the Del Mar racetrack into the must-see event of Southern California. He soon brought friends and actors, Pat O’Brien, who was elected vice president, and comedian Oliver Hardy, onto the board.

From 1942 through 1944 Del Mar experienced its “dark” period as the U.S. entered into World War II. During this

time the races stopped and the grounds were used by the military to train Marines, and then as a manufacturing site for B-17 bombers.

Playground of the Stars

A new crop of Hollywood arrived in 1948 after World War II, turning The Village of Del Mar into a “playground of the stars”. With the close proximity to Los Angeles, traveling to Del Mar was an easy trip and became a summer tradition for many who were drawn to the beautiful seaside town and its luxurious offerings.

Bing Crosby often invited his friends to Del Mar when he saw them on set or on the Hollywood back lot. Today, Joe Harper is the president and CEO of the Del Mar Thoroughbred club and has held the reins there for four decades. Harper fits right into the vintage glamor of Del Mar since he’s the grandson of legendary film director Cecil B. DeMille and grew up in the Hollywood limelight. He would accompany his grandfather on movie sets and even had walk-on parts in a couple of Oscar winning movies during his childhood, and also grew up around horses. Now he oversees racetrack operations. In his current position he works with jockeys and horses, schmoozes with celebrities, and has helped transform Del Mar racing into a must-do summer event. For decades Del Mar’s racing season has drawn Hollywood celebrities including Jimmy Durante, Lucy and Desi Arnaz, Burt Bacharach, and Angie Dickenson who all built homes in Del Mar during its hayday.

With its vintage coastal charm, natural elegance, and deep connection to the history of San Diego, Del Mar still remains home to many professional athletes and celebrities including professional skateboarder Tony Hawk, NFL quarterbacks Aaron Rogers and Drew Brees, and the lead singer of the band Journey, Steve Perry, just to name a few!

In the 1950’s Lucille Ball, American actress and comedienne, and husband, Desi  Arnaz, Cuban-born American actor and producer, most notably known for their on-screen marriage in the American sitcom I Love Lucy, lived in Del Mar right along the beach. Desi was an avid patron at the Del Mar race track and often brought Lucy with him, although Lucy was never a huge fan of his betting habits at the track. To counter his betting and to cause a laugh, Lucy would bet $2 on every horse in a race so when Desi lost and turned to her to ask, “Did you win?” she could reply “Yes, I sure did!” to the chagrin of her loving husband at the time.

Indulge in the relaxing resort life in Del Mar when you use your owner benefits of exchange or rental to stay at Villa L’Auberge to see why old Hollywood called this beautiful beach community their second home. Simply book online or call (877) 351-3855. 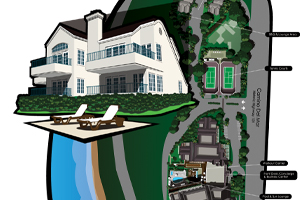